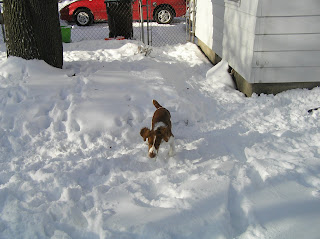 Sorry not to post sooner, but it has been (again) hectic. Roi'si'n is enjoying the snow and loves to dig in it. She also went to her first puppy class today (Saturday, January 17) and had a blast. Met a lab puppy and a miniature Aussie. Let's just say Rosy was the most animated dog there! She did well and was obviously happy with herself, has a long way to go in terms of learning not to jump on people, but we'll get there. The handouts will be really helpful in terms of guiding us in practicing small things every day, that will wind up with a nicely behaved puppy, who doesn't knock down small children. ;)

Annie obviously likes having Roi'si'n around, although sometimes I think puppy behavior ticks her off. She made a mad dash toward Rosy's back and made slapping motions toward her tail before madly dashing off down the hallway. But I think they'll wind up pretty good friends as soon as Ro quits chasing her.

Things of note : Rosy doesn't like Dave Matthews Band. Awww! They're one of my favorites. Guess I'll have to play things she likes better, like Christmas music and classical stuff! Really, I'm not kidding, her reaction to Dave Matthews Band is very much on the order of horrified realization that there's AWFUL NOISE coming from the CD player. Maybe her tastes will improve as she gets older.

On the reading front, over Christmas & New Year's breaks, I read Sue Grafton, Michael Critchton, and about fifteen other books that I can't recall right now, because its been too busy. Also started Inkdeath, but for some reason, can't find it now. Maybe Sis took it back. Picked up four or five books at the local (and favorite) bookstore today, including Jenny Nimmo's Charlie Bone series, which I really love. Need to win the lottery so I can buy lots of books, right?

Tomorrow a friend is going to show me how she does ski-joring and tracking with her dogs. Roi'si'n is showing increasing aptitude for using her nose. I'd love to get her certified soon (when she's six months old) and get her entered for some tracking tests coming up this spring. so that's what's been going on with us lately. Stay warm out there!
Posted by Kim Laird at 2:12 PM

Love hearing about Roisin and Annie. They're so much fun!

Hi Wendy! Aren't they though? Annie has personality plus, and Roi'si'n is so busy learning about the world and her place in it. I know puppies are lot of work, especially at first, but experiencing that joy and "wow" reaction to all the new things in the world really makes the world seem so much fresher and so much more fun. I think Annie likes Ro too, as much as (in cat fashion) she'd never admit it. 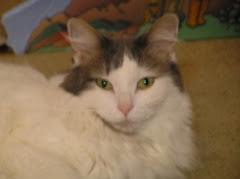 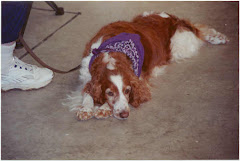